We're excited to announce that we are a Champion of National Cyber Security Awareness Month (NCSAM) for the second consecutive year. SIGNiX will be joining a growing global effort among businesses, government agencies, colleges and universities, associations, nonprofit organizations and individuals to promote 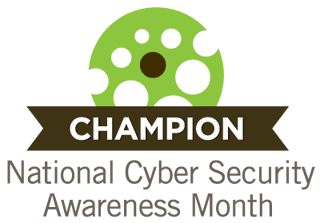 Recognized every October, NCSAM was created as a collaborative effort between government and industry to ensure all digital citizens have the resources needed to stay safer and more secure online while also protecting their personal information. As an official Champion, SIGNiX recognizes its commitment to cybersecurity, online safety and privacy.

“We're proud to join as a Champion of National Cyber Security Awareness Month again this year," said SIGNiX CEO, Jay Jumper. "Our mission is to ensure data privacy for everyone. Independent E-Signature™ technology safeguards the integrity of our customer’s documents and sensitive information against unforeseen risks in an evolving digital environment.”

Coordinated and led by the National Cyber Security Alliance (NCSA) and the U.S. Department of Homeland Security (DHS), NCSAM has grown exponentially since its inception, reaching consumers, small- and medium-sized businesses, corporations, educational institutions and young people across the nation and internationally. NCSAM 2015 was an unprecedented success, generating more than 1,700 news stories –an increase of 74 percent from NCSAM 2014’s media coverage. Kicking off NCSAM’s 13th year, this October presents a new opportunity to expand cybersecurity and privacy education and awareness globally.

"The Champion program is a vital part of National Cyber Security Awareness Month’s ongoing success. More than 700 organizations joined last year, a nearly 80-percent increase from the year before,” said Michael Kaiser, executive director of the National Cyber Security Alliance. “We are thankful to our 2016 Champion organizations for their support and commitment to our shared responsibility of promoting cybersecurity and online safety awareness."

For more information about NCSAM, the Champion program and how to participate in a wide variety of activities, visit staysafeonline.org/ncsam. You can also follow and use the official NCSAM hashtag #CyberAware on Twitter throughout the month.

To learn about e-signature security, download this free eBook.

About National Cyber Security Awareness Month
Now in its 13th year, NCSAM is designed to engage and educate public- and private-sector partners through events and initiatives with the goal of raising awareness about cybersecurity in order to increase the resiliency of the nation in the event of a cyber incident. Since President Obama’s proclamation establishing NCSAM in 2004, NCSAM has been formally recognized by Congress, federal, state and local governments and leaders from industry and academia. This united effort is necessary to maintain a cyberspace that is safer and more resilient and remains a source of tremendous opportunity and growth for years to come. For more information, visit staysafeonline.org/ncsam or dhs.gov/national-cyber-security-awareness-month.

Eli Lilly Federal Credit Union in Indianapolis was given an award for a local marketing video from the Telly Awards, whi...

Our Thoughts are with Hurricane Sandy Victims

Our Thoughts are with Hurricane Sandy Victims

Our thoughts and prayers are with those affected by Hurricane Sandy. Some of our very own are without power up in the No...

Does Your Business Have an Internet Security Plan?

Does Your Business Have an Internet Security Plan?

The internet has revolutionized the way we do business, allowing everything from online banking to employees working rem...