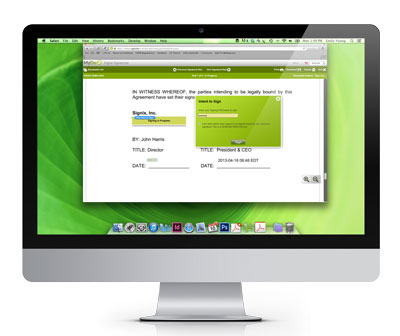 June 26, 2013—SIGNiX, the leading provider of secure digital signatures, is celebrating National ESIGN Day by allowing anyone to experience signing a document online.

“The ESIGN Act has been in effect for 13 years, but many Americans still haven’t ever signed a document online,” said Steve Bettis, senior vice president of sales for SIGNiX. “We want to give everyone the chance to try signing so they can see how easy it is.”

Anyone who’s ever opened a bank account from their couch or signed an important document online at midnight is able to do that because of the Electronic Signatures in Global and National Commerce Act (ESIGN Act). Signed into law by President Bill Clinton on June 30, 2000, the ESIGN Act established a federal safety net to make sure that electronic contracts would be considered legal for commerce nationwide.

With the ESIGN Act, the government established that electronic signatures have the same legal standing as a traditional signature on a piece of paper. This legislation opened the door for digital signature technology companies like SIGNiX to be seen as a secure and legally enforceable way to sign documents.

But more than a decade later, just meeting the basic definition of a signature in ESIGN may not be enough to defend a document in court. According to the American Bar Association, “A signature should identify what is signed, making it impracticable to falsify or alter either the signed matter or the signature without detection.”

To defend against a legal dispute, the document or signature vendor must also be able to prove whether:

SIGNiX offers all of these features to make sure that documents aren’t just ESIGN compliant, but that they also provide the type of evidence required to defend them if they’re challenged in court.

How to Track Documents With Digital Signature Software

How to Track Documents With Digital Signature Software

Here at SIGNiX, we're always working to make it even faster and easier to get documents signed online. That’s why we’re ...

Try Signing a Document to See Digital Signatures in Action

Try Signing a Document to See Digital Signatures in Action

We released our Spring 2013 product update this month, and we added some great new features. I’m particularly excited th...