In 2004, Christina Labajo bought a DVD, a soda and some candy at a Best Buy in California. When Christina went to pay, the clerk told her she could get a subscription to Sports Illustrated for free, and Christina said she’d like that.

Christina got eight free issues of the magazine, but her subscription was automatically renewed, and $70.50 was charged to the debit card she used at Best Buy. Christina sued Best Buy, and Best Buy tried to dismiss the charges, but the court ruled in her favor because of breach of contract and unjust enrichment.

In fact, “Specifically, the managers instruct[ed] the employees to inform the consumer that the credit or debit card information [was] used to validate the consumer's information for the magazine subscription, and that the card would not be charged.

In addition, when consumers [were] asked to sign the electronic credit-card signature pad, the conditions of the magazine subscription offer [were] not displayed on the screen they [were] signing. Consumers [were] not informed as to the terms of the magazine subscription until after the transaction has been processed, and the consumer's credit or debit card information ha[d] already been collected by [Best Buy].” [Labajo vs. Best Buy Stores, L.P., 478 F.Supp.2d 523 (2007)]

The reason Christina’s trial proceeded for breach of contract was because Best Buy’s signature software didn’t comply with two of the pillars of the legality of digital signatures: consent and association. Though Christina’s signature was perfectly legal, it didn’t hold up in court because Best Buy couldn’t prove that she read and agreed to the terms of the document she was signing. Also, the signature could not be connected directly with the content to be signed.

In the end, Best Buy refunded her money, and the case was settled.

This just goes to show how important the “disclosure and consent” capabilities are for any electronic signature solution. 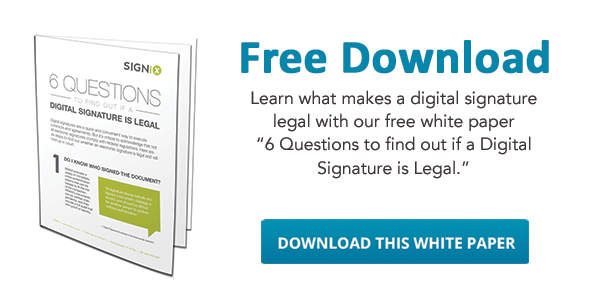 How to create a document for digital signature online with MyDoX

How to create a document for digital signature online with MyDoX

Looking for a way to create digital signatures online? With MyDoX, it couldn’t be easier. Our cloud-based service lets y...

What type of e-signature should governments use?