What to Expect if Your Digital Signature is Challenged in Court

The widespread use of the Internet has made life easier for businesses and the people who run them in more ways that I can count. But those benefits don't come without some risks too. These days, it's hard to go a week without hearing about another case of cyber crime or Internet fraud.

That's why electronic evidence is more important than ever. No one plans to become the victim of fraud or to be accused of fraud, but it’s essential to be prepared to defend your documents. Finding out that one of your documents is being challenged by a court (or a regulatory agency) can be scary—but it doesn’t have to be.

When it comes to digital signature court cases, electronic evidence is key. But it’s not always clear how much digital evidence is enough if a document is challenged in court.

How Much Evidence is Enough?

Many different legal authorities evaluate documents if they’re called into question. A criminal court uses the standard of “proof beyond a reasonable doubt,” and that’s a very high standard. On the other hand, many civil courts use the standard of “preponderance of evidence,” which is a lower standard. 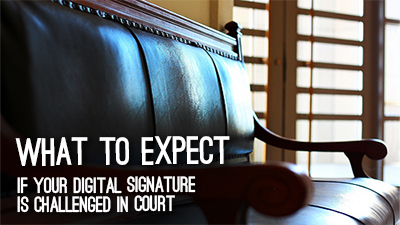 Courts of law aren’t the only authorities that might evaluate your documents’ evidence. You might also have to stand up to criticism of auditors, prosecutors, regulatory agencies or simply the court of public opinion.

“It is hard to predict in advance what evidence a legal authority will believe and not believe.  Often, in a criminal court for instance, the primary authority for evaluating evidence is a humble jury of 6 or 12 common people,” says lawyer and electronic evidence expert Ben Wright. “Judges, juries and other authorities often do not have much technical expertise. When it comes to computer evidence, often they must rely upon testimony and guidance from experts.”

The Power of Cross-Examination and Corroboration

In the courtroom, lawyers often evaluate electronic evidence by using cross-examination.  This technique calls a witness to the stand to explain the evidence. It’s important to hire an experienced forensics expert to defend your documents.

Often, experts must answer hostile questions while under oath. The more evidence is contained in the document, the easier it will be for the forensics expert to defend the document and its signatures. This is where a highly detailed audit trail comes in (learn more about audit trails by clicking here).

“A good investigative expert understands how to weigh evidence and how to separate strong evidence from weak evidence,” Wright says. “Such an expert is able to set his or her ego aside and acknowledge when he or she does not know something or have enough data to state an opinion.”

Another way to improve the quality of evidence is to corroborate it—a process of getting similar evidence from more than one source.

Factors Beyond Your Control

Unfortunately, the cold hard facts aren’t the only thing that will factor into the judge or jury’s decision. In fact, digital forensic dispute guru Craig Ball says the following things heavily factor into the final interpretation of electronic evidence:

“The process for articulating and evaluating the true facts in a case can influence the outcome as much as the facts themselves,” Wright says.

With these things in mind, you can see how important it is to choose a vendor that will give you the most legal evidence possible. A qualified digital forensics expert who is armed with a highly detailed audit trail should have an easy time proving the validity of a digitally signed document. In fact, we’ve had a couple of real estate clients who have stayed out of court altogether because of the level of evidence provided within each SIGNiX-signed document.

The Small Business Community Association honors a local digital signature company for its growth and support of the comm...