Ten Significant American Signatures That Aren't From Founders or Framers

Obviously, we spend a lot of time talking about signatures here at SIGNiX. When it comes to our business, we try to explain the difference between the mere image of a signature associated with a digital document (which is how a lot of simple e-signatures work) and the sophisticated exchange of public and private cryptographic keys that make our true digital signature more secure, more private, and more legally durable.

The point here, whether we're talking pen-to-paper or PDF, is that a signature is so much more than a mark on a page. It's even more than the complex legal ideas it represents. A signature is an artifact that says something about who we are as people, and what we want in a moment of our lives.

With that, in celebration of this 4th of July, here are 10 signatures from American history that help to define our grand experiment. We've purposefully avoided the signatures on the Declaration of Independence and the Constitution because, well, you can find those anywhere. 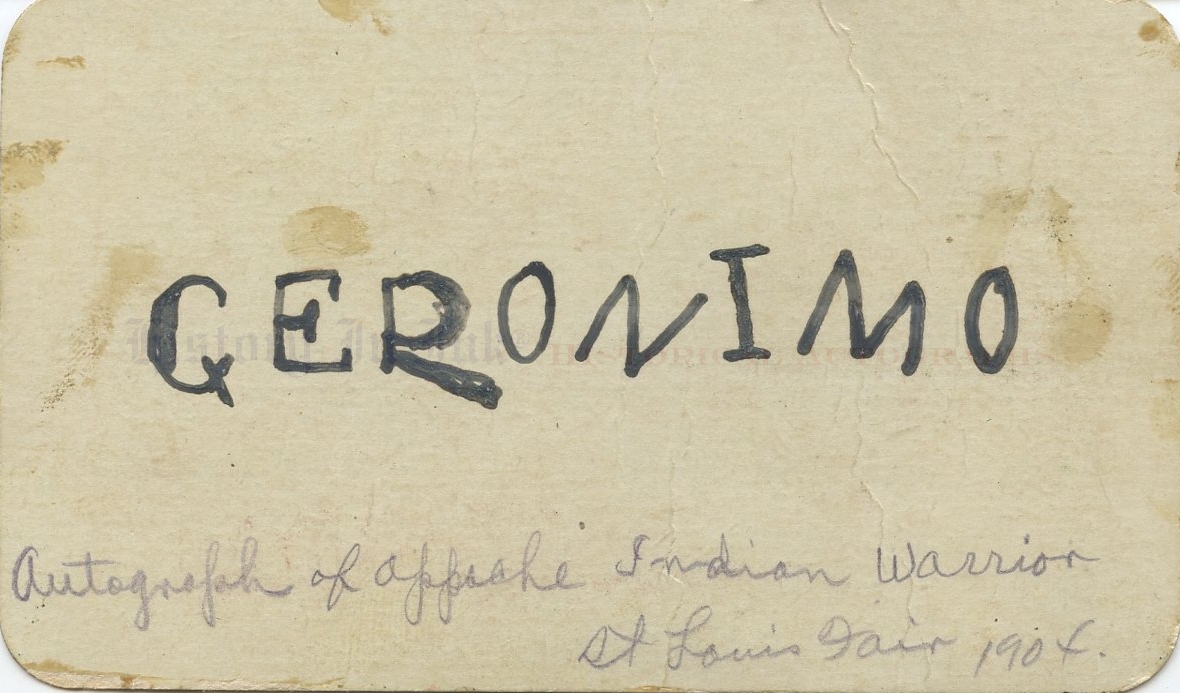 Geronimo was a prominent leader and medicine man from the Bedonkohe band of the Apache tribe. After leading raids against American soldiers in the Apache-Us Wars, Geronimo was captured and exiled a number of times before finally surrendering as a prisoner of war in 1886. This signature comes from Geronimo's later years, when he toured as speaker on behalf of the US government, an agreement that was both useful for the country's politics and mildly lucrative for Geronimo himself. 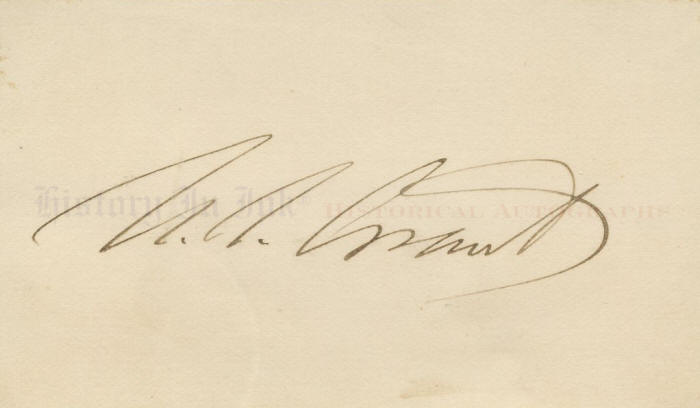 Ulysses Grant was an American soldier, politician, and international statesman who served as the 18th president of the United States from 1869 to 1877. He famously accepted the Confederacy's surrender from Robert E. Lee at Appomattox Courthouse on April 9, 1865, leading to his tumultuous presidency. As President, Grant helped to stabilize the country's economy by returning currency to the gold standard with the Coinage Act of 1873. He also instituted the Native American Peace Policy which made some progress in normalizing relations with defeated Native American tribes in the western half of the country. This signature is purported to be from 1885, months before Grant's death.

Widely regarded as "America's Greatest Inventor," Thomas Alva Edison holds over 1,000 patents representing some of the most significant devices of the modern era. Edison's inventions include the telegraph, the movie projector, the record player, the electric lamp and, most importantly, the electric incandescent light bulb. While his career wasn't without controversy (like his feud with Nikola Tesla), there's no denying Edison's far-reaching impact on life as we know it. The autograph above comes from one of Edison's stock certificates, and features his shorthand "Thos A Edison."

Booker T. Washington was the dominant presence of the African-American community at the turn of the 20th Century. Born into slavery, he eventually founded the Tuskegee Institute in Alabama with the purpose of gaining social equality through "industry, thrift, intelligence and property." Though he was a legendary pragmatist, Washington lobbied against Jim Crow-era discrimination and segregation while also building alliances with white patrons and philanthropists. This signature is from a Tuskegee Institute letterhead circa 1901.

Theodore "Teddy" Roosevelt and Franklin Delano Roosevelt were the 26th and 32nd Presidents of the United States, respectively. They're often used as primary examples of radically different polarities of American diplomatic philosophy: Teddy Roosevelt's approach was brash and bold (he famously commanded the United States Naval Fleet to sail around the world) while FDR's was genteel, transactional, and charismatic. Both Roosevelts were brave and ambitious, indelibly defining the trajectory of American political identity both domestically and internationally.

Paul Tibbets was best known as the pilot of the Enola Gay, the bomber that dropped the first atomic bomb on Hiroshima in WWII. His relationship with the B-29 model preceded his fateful flight over Japan, all the way to the aircraft's development. After a successful career as a B-17 Flying Fortress pilot over Germany, Tibbets returned to the United States to help with flight testing of the B-29 Superfortress, a more sophisticated aircraft with the range and high-altitude bombing ability necessary to function in the Pacific Theater of War. He personally chose the B-29 he would fly from the assembly line in Bellevue, Nebraska. Tibbets named the aircraft Enola Gay after his mother. 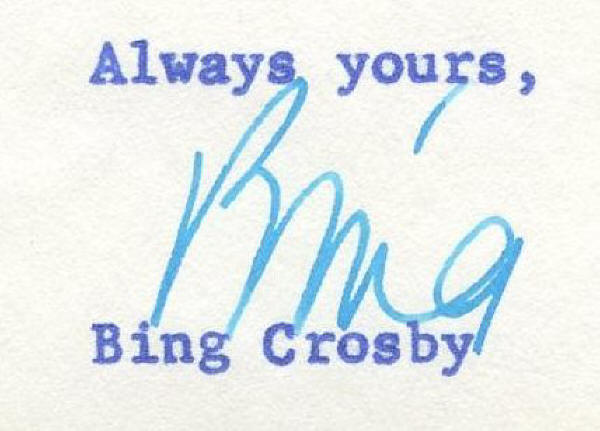 Harold Crosby Jr. was the first crossover star, a leader in radio, movie, and record sales throughout the 1930s, 1940s, and 1950s. He's the only person with three stars on the Hollywood Walk of Fame. Crosby's most famous performance is indisputably his rendition of Irving Berlin's "White Christmas," which premiered on the radio on Christmas Day, 1941. Ever humble, Crosby minimized the massive success of the single, saying "A jackdaw with a cleft palette could've sung it successfully." 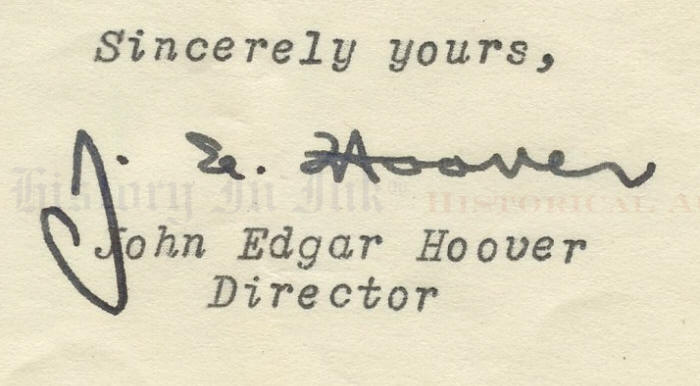 J. Edgar Hoover was the first Director of the Federal Bureau of Investigation and instrumental in the founding in 1935. He continued as Director for 37 years and is credited with expanding the FBI's influence, technology, and capabilities in law enforcement. Hoover overcame his childhood stutter by teaching himself to speak quickly and aggressively, skills that would serve him well in public and private political maneuvers. After his death in 1972, stories of Hoover's hidden affairs and secret dossiers began to seep out of the Washington shadows and into popular culture. This signature comes from a letter printed on FBI letterhead, informing a job applicant of her proabtionary appointment to the Bureau as a clerk.

Marshall was an Associate Justice of the United States Supreme Court, it's 96th overall and the first African-American to hold the position. He was a legendary supporter of individual rights throughout his career on the nation's high court, but perhaps the most important hallmark of his legacy came before his appointment, when he argued Brown v. Board of Education on behalf of the Brown family. The case eventually brought an end to "separate but equal" segregation practices in the nation.

Upgrade Document Processing with E-Signatures from SIGNiX and Laser App

Upgrade Document Processing with E-Signatures from SIGNiX and Laser App

SIGNiX is excited to announce the signing of a strategic financial services client, The Trust Company. The Knoxville, Te...

The SIGNiX Limelight shines on members of the SIGNiX Team to show the world just how great our co-workers really are. En...